Being a non-profit working with young and old adults involved within the criminal justice system, we hear the term Trauma Informed Care more often than not. As a matter of fact, the term, especially when dealing with alternatives to incarceration, our criminal justice system, and effective reintegration, is in the limelight right now. According to those in the know:

Trauma Informed Care is an organizational structure and treatment framework that involves understanding, recognizing, and responding to the effects of all types of trauma.

I remember growing up and how the word trauma was tagged (exclusively) to a military setting. No doubt, heading off to war can (and often will) directly affect the individual; of that there is little dispute. Way back when, it was rare that anyone not directly involved with the military was recognized as shouldering post-traumatic stress.

Unfortunately, family members left behind were often forgotten about or brushed to the side when it came to trauma… out of sight… their voice was rarely heard.

Jumping from childhood to well into adulthood, the consequence of trauma has been expanded to those outside of the military to include individuals indirectly involved in the incident or event. With such an expansion recognized, recovery is being addressed in a more effective manner… no more out of sight… their voice will be heard.

By today’s standards, traumatic experiences requiring care ranges from the obvious to the not-so-obvious. When it comes to our vulnerable youth and the effects of trauma, the world, neighborhood, and home can create an ever-lasting impression on the heart, mind, and soul; without proper care, these youth are at risk.

Beneath the trauma inducing umbrella are events such as:

Natural disaster
Death of a loved one
Being in a car accident
Child witnessing home abuse
Family member going to prison
Loud noises, gun shots being heard
Shootings and/or neighborhood fighting
Child being the victim of abuse, physical and/or emotional

The above is not all-inclusive but should give you an idea as to what we are dealing with. 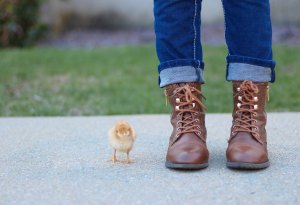 On a personal level, the following happened years ago, which, if handled incorrectly, could have changed the path of two very young boys:

When my two boys were just three and four years of age, I purchased two living ducklings as an Easter present (before you panic, we lived on a farm so this was normal activity). My boys were in total awe at the new addition and insisted the ducks stayed in the house. I allowed.

On the second night, the new addition remained inside and in a cardboard box like the night before. After much quacking and smelling of duck poop, around 4:00 am, I placed the cardboard box outside, just within reach of the door. Unfortunately the night was a bit too cold and the ducks did not make it.

My boys woke to the sound of silence as they stepped out to an unexpected event. They both were very upset, shed tears, and did not understand what had happened. That morning, I sat the boys down and explained in a calm and empathetic way what had happened. Over the next few days we had gentle and sensitive talks about it and before long, all was fine.

Though insignificant in comparison, if handled without care and empathy, the event could have made a rippling psychological scar of one or both of my boys.

If a traumatic event happens to someone in your life, do know there are general things one can do to minimize lifelong effects. In my situation outlined above, I remained patient and understanding, allowing deep and meaningful discussions (even though the boys were very young, they deserved respect, a voice, warmth, and empathy).

Simply being there is the first step, as for second and third steps, we’ll review what the experts in the field suggest in articles to come.

To help all of us progress, I welcome your stories to be added into our series.

If you chose to share, email me directly at dhuffman@2ndChanceUniversity.org.